History of the site

Around the year 1000, two great lords, the Count of Anjou, Foulques Nerra, and the Count of Blois, Eudes I, fought over the Touraine. At the end of the 10th century, Foulques Nerra conquered Langeais, between Tours and Saumur, and founded a fortress on the promontory overhanging the Loire. A turbulent history then began for Langeais, in turn occupied by the Counts of Blois and of Anjou. With the rest of the Touraine, Langeais finally remained in the hands of the House of Anjou then the Angevin dynasty of the House of Plantagenet until the end of the 12th century. In 1206, Langeais became part of the Crown lands of France following the French king Philippe Auguste’s victories. During the Hundred Years War, armed bands occupied the fortress. Charles VII bought it in 1422, then ordered that it be destroyed, except for the keep. That keep, moreover, is one of the oldest in stone still standing today.

In 1465, Louis XI decided to have a new château built in Langeais. Its architecture reflects the changes taking place as the 15th century drew to a close. On the town side, the façade has all the attributes of a fortified castle : huge towers, drawbridge, parapet walk on machicolations. However, the edifice is no longer a veritable fortress. On the courtyard side, the façade corresponds to what a king or a lord would have wanted from his residence: a pleasant place to live, opening to the outside through beautiful windows. Construction lasted two years. The work had been entrusted to Jean Bourré, the king’s faithful advisor, and to Jean Briçonnet, also close to the king and, at the time, mayor of  Tours. In July 1466, Louis XI ceded the château to his cousin, Dunois, the son of Joan of Arc’s companion.

In one of the great halls of Dunois’s château, in the presence of a small gathering of people, the wedding of Charles VIII of France and Anne of Brittany took place, at dawn on December 6, 1491. This marriage marked the beginning of the incorporation of the duchy of Brittany into the French kingdom. The contract granted the spouses mutual rights over the duchy; in addition, Anne promised to wed, if the king died without a son, the new sovereign. Which is exactly what happened: the royal couple’s children died at birth or at an early age. Charles VIII died in 1498 at the château of Amboise. Anne of Brittany then married Charles VIII’s cousin, Louis d’Orléans, who reigned under the name Louis XII.

Jacques Siegfried and the rebirth of Langeais

After the end of the 15th century, the château of Langeais was ceded to different people and underwent little maintenance. Jacques Siegfried, a very active businessman and great lover of art of the Middle Ages, acquired it in 1886. He then spent nearly twenty years of his life restoring and refurnishing it, thus reconstructing the living environment of the nobility at the end of the Middle Ages. In 1904, he donated the château and its rich collection to the Institut de France, which is still the proprietor.
Roland Recht, art historian and member of the Institut de France, has been the château’s curator since January 2013. The Jacques Siegfried Foundation, bequeathed to the Institut de France, chose in 2005 the Kléber Rossillon corporation to handle the management of the Château de Langeais until 2020. Kléber Rossillon devotes a great part of its time to conserving and making known this heritage. For more information about the Kléber Rossillon corporation, please consult the web site : www.kleber-rossillon.com

The interior is made up of fifteen rooms :

– set out with richly sculpted furnishings that show the tastes and the comforts of the end of the Middle Ages ;
– ornamented with a considerable collection of tapestries from the 15th and 16th centuries, remarkable for their state of preservation and offering a complete panorama of production at that time ;
– laid with sumptuous ornamental tiling inspired by medieval motifs.

In the chateau, you will discover :

– the daily life of a great lord at the end of the Middle Ages, with a living scenography (reconstitutions, special lighting…) that recreates the atmosphere and organisation of a great lordly residence ;
– the History of France, with a scene of the wedding of Charles VIII and Anne of Brittany ;
– a museum space bringing together major works from the period (the Preux wall hangings, a collection of sacred art). 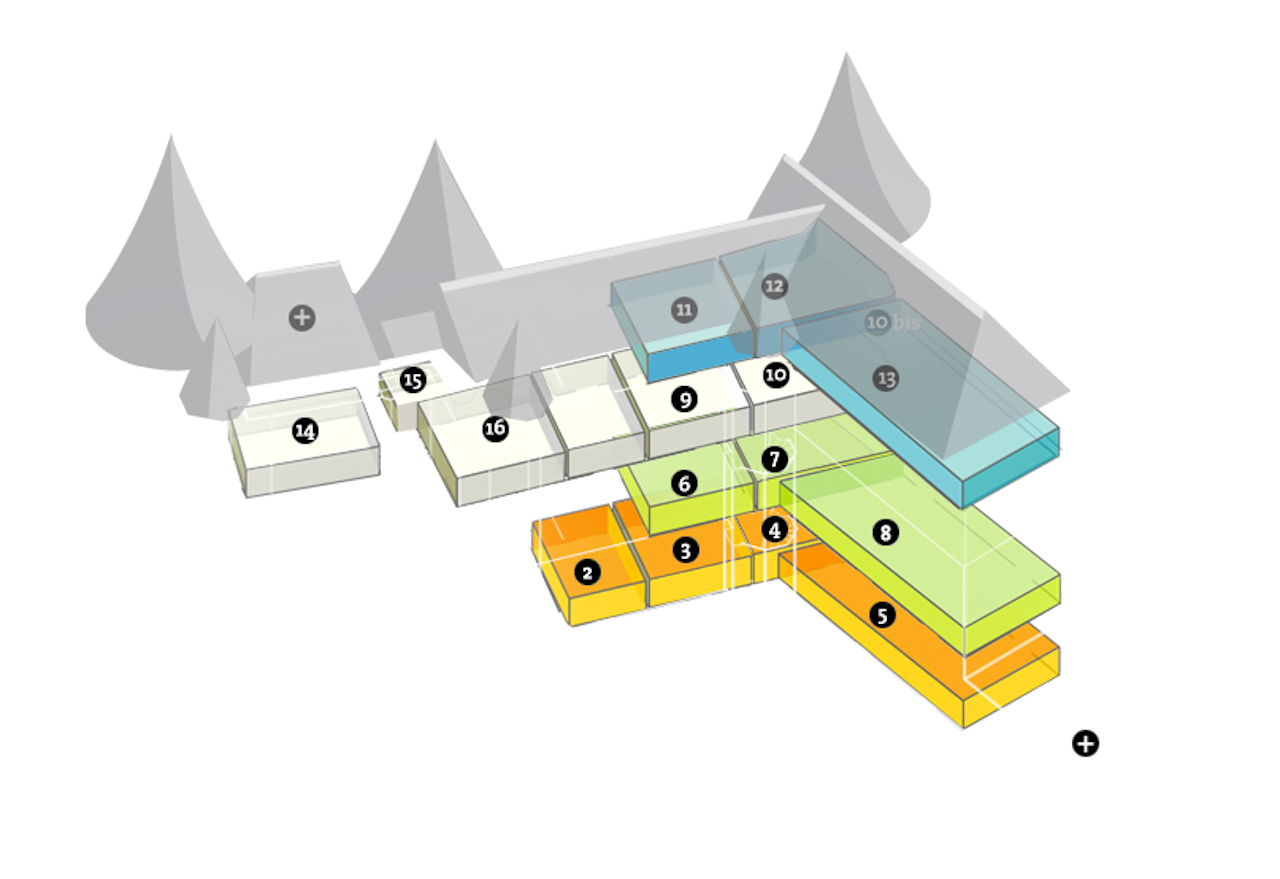 The Parapet Walk
This covered walk runs around the entire façade of the château, offering magnificent views over the town of Langeais and the Loire River.

Room II
The Painted Panelling Room
In the Middle Ages, members of the nobility had an itinerant lifestyle and were often on the move. Chests were well suited to this kind of life, because they were used as trunks for travelling, provided storage after arrival, and then even served as furniture, turning into benches for seating. 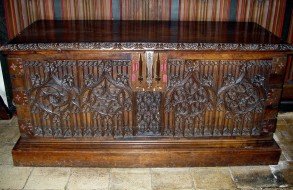 Room III
“Mille Fleurs” Room
Woven works of wool or silk, the tapestries warmed and adorned the walls. The sumptuousness of the colours and the variety of motifs were an indication of the owner’s wealth. 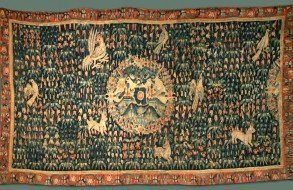 Room IV Insignia Room
Anne of Brittany’s motto, “Potius mori quam foedari” (meaning “Death rather than dishonour”), can be read on the walls of this room. Her emblem, the ermine tail, can be seen in the ornamental tiling, alongside that of Charles VIII, the fleur-de-lis… 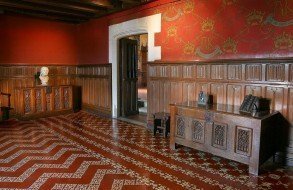 Room V
Banquet hall
The monumental fireplace, ornamented with a fortified castle, well proves the ceremonial functions of this great hall reserved for banquets, festivities or political meetings. The reconstitution of a banqueting table, with its precious dishes and different services (soups, meats, sweets…), reveals the refinement of medieval table manners and gastronomy. 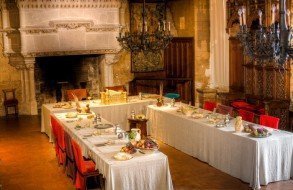 Room VI
Antechamber
Furniture (credenza, bed) and tapestries decorate this room, site of a privileged life within which the day to day happenings in the Middle Ages took place (meals, private meetings, etc.). 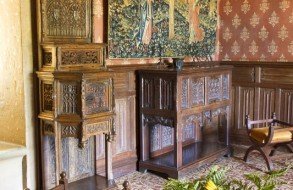 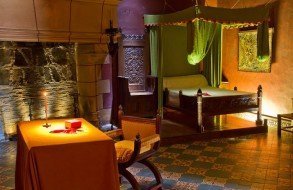 Room VIII
Wedding Hall
Here the visitor is at the heart of the marriage of Charles VIII and the young Duchess Anne of Brittany in 1491, which marked the beginning of the full union of Brittany with France 41 years later. 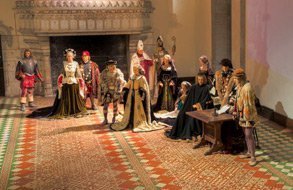 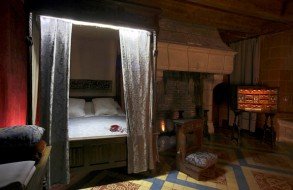 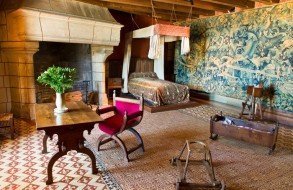 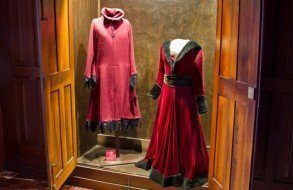 Room XI
Reading room
Reading area with comics and educational books (in French) on the theme of the Middle Ages available for children. Exhibition of a weaving loom. 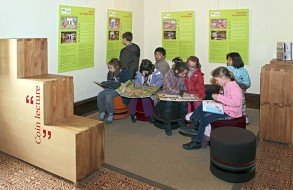 Room XII
Sacred Arts Room
A museum in colours of the Middle Ages, exceptional works of religious art are presented to visitors: the Tapestries of the Mystery of the Eucharist (early 16th century), a Virgin and Child from the 14th century, 13th century reliquary chest in gilded wood and more..

Room XIII
The hall of The Worthies
Under its high solidly-built vault, this room hosts the prestigious series of The Worthies.The museography, equipped with an innovative lighting, reveals every detail of these tapestries and invites you to discover The Worthies who, during the Middle Ages and Renaissance, incarnated the great chivalric values. A 15th century suit of armour from Northern Italy is also presented. 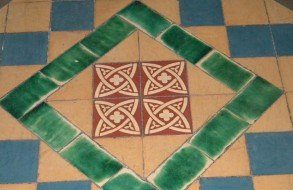 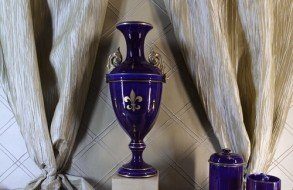 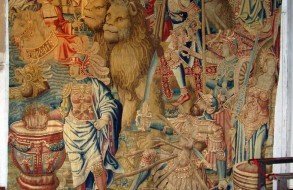 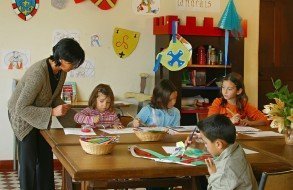 – Scaffolding and lifting machines : faithfully reconstituted behind the keep, they show the construction methods of builders in the year 1000.

– Playgrounds and, for the young and old alike, a 6-storey treehouse built in a majestic cedar several centuries old. The treehouse offers unobstructed views over the park and the ruins of the 11th century chapel.

– Belvedere : the promenade, between cedars and sequoias, ends up at the belvedere with a telescope over the Loire, a cultural landscape today listed as world heritage by UNESCO. 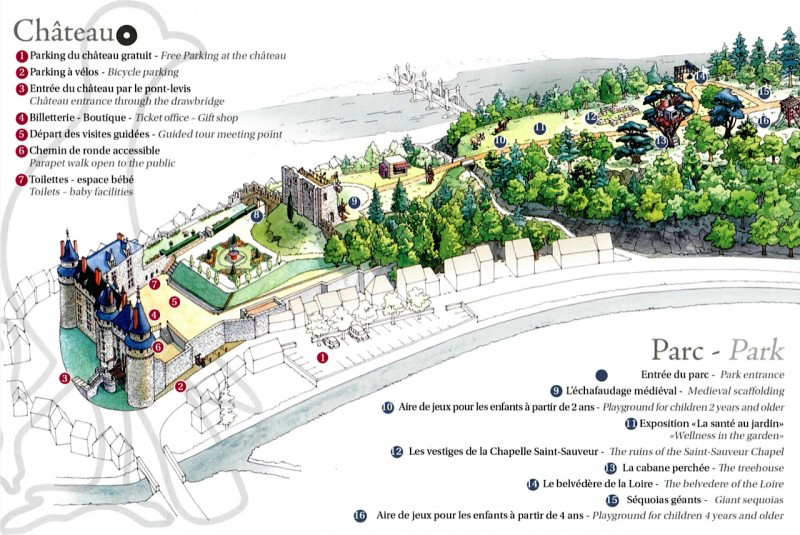 Also at the Château de Langeais:

– Possibility of picnicking in the château’s park or in the covered market in the town centre in the case of rain (2 min on foot) / Beverages on sale at the gift shop.

– Rest and recreations areas in the park : playgrounds and tree house.